The seasonal flu happens every year, but it’s always difficult to predict how severe flu season – and the associated symptoms – will be. You likely have a lot of questions about what that means for you and your family. When does the seasonal flu typically strike? What are some common flu symptoms and how can you treat them? What about the flu vaccine? When should you get it and can you get both the flu and COVID-19 vaccines at the same time? Let’s learn more about the seasonal flu.

Flu season: When is it and why is it a thing?

When does flu season peak?

Flu season usually starts ramping up in November, with the number of illnesses peaking between December and February. But the seasonal flu can strike as early as October and late as May.

Why do we have a flu season?

Influenza viruses circulate year-round, but we don’t usually see a rise in cases until colder temperatures set in. And honestly, we don’t know exactly why.

Some scientists attribute a rise in influenza viruses during the winter months to a belief that these viruses thrive in cold, dry climates. Others think that reduced daylight hours (and less Vitamin D and melatonin as a result) weaken our immune systems – making us more susceptible to viruses and illnesses.

But the theory with the most scientific clout is a simple and familiar one: We spend more time inside during the winter months, which means we also spend a lot more time breathing in the same air and germs as those around us.

Influenza can live on surfaces and be transmitted when you touch something like a doorknob and then rub your eyes or nose. But it’s more commonly spread by close contact with others and through the air. From talking and eating to coughing and sneezing, influenza viruses can travel through the air in respiratory droplets that you breathe in and then become infected.

The best way to protect against the viruses that cause common illnesses like seasonal flu and COVID-19, is to get vaccinated. It takes about 2 weeks to build up full protection after vaccination, so keep this in mind as flu season approaches. Ideally, it’s a good rule to get your annual vaccine by the end of October – but later is better than never. The same goes for COVID vaccines and boosters and yes, it’s completely safe to get both the seasonal flu and COVID vaccines at the same time.

Influenza viruses – typically Influenza A and Influenza B strains – cause the seasonal flu. Each year, the Centers for Disease Control and Prevention (CDC) and the World Health Organization (WHO) monitor flu patterns. This helps them develop the most effective flu vaccine possible for the coming flu season.

The seasonal flu is a highly-contagious respiratory illnesses that tends to hit hard and fast – making you feel feverish, achy and all-around crummy.

Flu symptoms come on fast while the onset of COVID-19 symptoms is more gradual. Most people don’t need to be tested for influenza, as it can be treated without testing (or is usually only needed if you are very ill – i.e. you are hospitalized). Home COVID tests provide an easy, fast and effective way to get results.

Thankfully, there are things you can do at home to feel better while you recover from the flu.

At-home care tips for the flu

It’s also important to listen to your body, take it easy and drink lots of clear and non-caffeinated liquids. Feel better!

Think you have the flu? 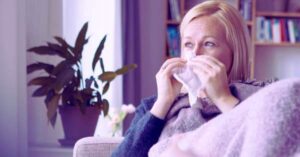 Everything you need to know about the flu 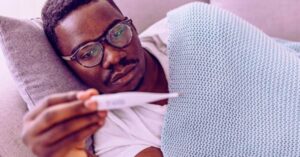 Do I have the flu? Symptoms and treatment options